1960: In the window of the local Wolverhampton music shop — The Band Box — there appeared one day a secondhand bass guitar. It had a long neck, one real pick-up, two knobs, a single cutaway like a Les Paul, and adorning the headstock — for some unexplained reason — was the silver emblem from a Remington typewriter. I had to have it. It was a Dallas Tuxedo and after withdrawing my entire GPO account savings of £16, it was mine: my first real bass. Not only did the instrument sound wonderful played through my parents' huge Murphy radio, it looked great too. It was the first solid-bodied instrument to appear in our village and I was the first band member to attach the shoulder strap to the body of the instrument itself (a dressing gown cord attached to the headstock had been the previous method). I’ve since found out that a similar model was the first bass guitar to be used by both Bill Wyman and John Paul Jones. 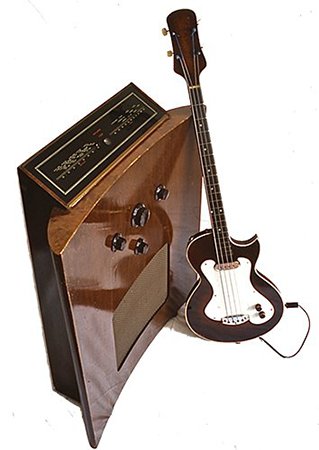 2016: I thought it was about time that the Tuxedo became a working instrument, and not just a piece of memorabilia hanging on the wall.
All of my other basses have round-wound strings fitted but I wanted to be able to get the sound that Paul McCartney made on his Hofner Bass, with flat-wound strings played with a pick, and muted with the palm .
Martin Petersen at the Bass Gallery in Camden first fitted a truss rod to straighten the neck (it used to have a simple piece of aluminium T-section which had bent). He then added a better bridge for intonation adjustment and more clearance, new control knobs, and new tuners. The pickup remains the original.
After 56 years the instrument is now actually playable. And it’s fun.

1968: When my first real band, Affinity, was formed I went to Pan Music in Soho and bought my first real bass, a secondhand, dark red Gibson EBO. It appears on the live Affinity album recorded at Ronnie Scott’s club in 1969. But t didn't take long to recognise the deficiences of the single very muddy-sounding pickup, so I went to Orange Music in Soho and swapped the EBO for a beautiful secondhand sunburst Fender Jazz Bass.

1973: An indicator of immaturity is the desire to possess something that you don't really need. I was immature and really needed a "twin-neck" : Jimmy Page of Led Zeppelin had one, John McLaughlin of the Mahavishnu Orchestra had one, and Charlie Whitney of Family had one. Unfortunately they were all guitarists and played the incredibly useful 12-string/6-string model, whereas I was a bass player and therefore would need the much more unusual, and moderately pointless, bass/6-string variety. I suddenly spotted one in an advert: it was effectively an EB3 and an SG on one body, this was heaven! It had been built in 1964 and, although it needed a little re-wiring, it looked gorgeous.

The instrument did, however, have two problems:

1976: Inspired by the exquisite sounds being made by Jaco Pastorius I enlisted the help of symphony-bass repairman and craftsman Neville Whitehead; it was his suggestion that he remove the entire fingerboard of my beloved Fender Jazz Bass, frets and all, and replace it with a 100-year old piece of ebony that he'd removed from an old upright. It seemed like a good idea. He went through three plane blades. Each visit to his workshop felt like I was being fitted for a suit. The finished bass was amazing and although the neck was a little fat, front to back, that soon ceased to be a problem. The main thing - the 'sound' was there - the growls, the singing. The neck was pure black with no lines, no markers, and I struggled like this (and played some sessions on it) for six months even though I had great difficulty knowing where I was on the neck. I finally rationalised that I should have helpful fret-lines put on and entrusted luthier Dick Knight with the task. He did a beautiful job. Some time later the body was stripped to plain wood and I replaced the bridge with a Badass. EMG pickups were added in 1982. This instrument has become my 'voice'.

1974: I was criss-crossing America. When you are on tour it's always tempting to visit the local music stores to try out new instruments. The shop in Atlanta didn't look too special so I was not ready for that surprise moment when you realise that the instrument you are holding just happens to be perfect. The brand new stock Fender Precision that I tried out that day has since become my main work-horse. In 1979 I added a Badass bridge and some Schecter hardware that I'd bought in Manny's shop in 48th Street, New York. Some time later an EMG bridge pickup was installed by Roka's of Denmark Street, Soho.

1977: I bought this from a friend. Alembics were unobtainable in Britain but I wanted to make the sounds that Stanley Clarke made. The Kramer came close but the aluminium neck was uncomfortable to touch when cold. I played it on an album track for Dennis Waterman. This tune was subseqently used as the theme for the TV series, Minder.

1979: I had been recording at Caribou Ranch Studios in Colorado and decided that rather than go straight home afterwards I would visit friends on the East Coast. Naturally I gravitated to 48th Street in NYC where I spotted a beautiful Alembic Series 1 in Sam Ash Music. The bass was a monster — with its twinkling red LEDs — and I used it often until 1985 when it was stolen from my house. To my great surprise it came back to me in 2015.
Meeting an old friend after a long gap can sometimes be a little difficult: there is lots of catching up to do. I experienced similar emotions when I was reunited with this unique musical instrument after a gap of 30 years – we sat and stared at each other for quite a while! It saddens me that its sound was absent from all of my solo albums,
Despite some severe weathering and heavy damage to the finish, the neck and electronics were still in surprisingly good health. The job of restoration was given to luthier Martin Petersen at the Bass Gallery in London. The instrument now looks like a work of art .
My thanks to Neil MacMullen who discovered and returned it, and to Martin and John at the Gallery.
Alembic Inc informed me that the bass — which is made mostly of walnut — had its 36th birthday in July 2015.  To celebrate its return Kay made a birthday cake — walnut of course.

see pictures of The Alembic Restoration

1980: I bought this secondhand - just because I loved the sound. And if you play it through a tremolo unit it is possible to make a sound not unlike that of Duane Eddy

1990: I was wandering around a trade fair looking for a good 5-string bass. Most of the instruments that I tried were terrible - they didn't balance, they rattled, or they sounded like shit. There was one exception: an instrument built by Overwater, a company founded by luthier Chris May. We chatted, and he designed a 36inch scale, through-neck bass for me of light oak.

1993: One of the advantages of leaving your own instruments at home is that it gives you the chance to try different models. I was recording an album in Tokyo and, of the ten different instruments brought in to the studio for me to check out, only a Moon — made by a local company — felt comfortable. I contacted the factory and they agreed to build a fretless 5-string bass for me. Constructed from walnut, and with black hardware, it arrived in London a year later. The Moon is a beautiful instrument but I no longer own it. 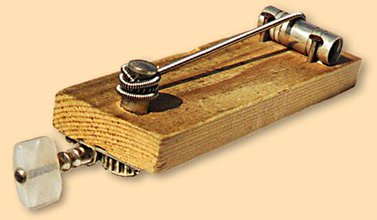 There was a serious function to my home-made machine. At the beginning of 1971 I was still playing with a pick, but when I started doing session work I realised that the best sound comes from the fingers. The trouble was that this style of playing initially makes the finger-tips very sore, so I built this device to help me to harden the calluses when practicing away from the instrument.
It consisted of a 6" piece of wood, one string, one tuning peg and a jack plug casing for a bridge held in place by two nails. It fitted perfectly in the large pocket of my ex-Swedish army officer's coat, and as I rhythmically plucked the solitary string it definitely helped me to develop the required hardness. I had to be careful though, since the repetitive motion of my hand inside my coat looked like I was having way too much fun, and could easily have been misinterpreted!