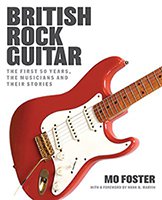 Session musicians were a strange bunch. Very few of them began their career in music with the intention of becoming a studio player; it was just something that happened along the way. Between the 1950s and 1970s, the number of rhythm section players who did all the work in Britain was very small, maybe two or three hundred guys at the most and only four women, who all happened to be keyboard players. Everybody tended to know everybody else. This world wasn’t as closed as it may have seemed to those trying to get in, but it was selective. If a new musician appeared on the scene with something special - whether it was a sound, a feel, a sight-reading ability, a new technique, or just pure musicality - then he or she would be welcomed in.

A sense of humour was a prerequisite, to survive the long hours and to fend off the stream of wind-ups and ironic jibes that were part of the job. It was hard work but great fun. (‘Laughter occurs when people are comfortable with one another, when they feel open and free’ - a quote from an article in New Scientist by Mahadev Apte, a cultural anthropologist at Duke University in Durham, North Carolina.)

There was no accepted route into studio work, just as there was no ‘A’ level in session playing. Rather, it was the music colleges, dance bands, brass bands, rock and jazz groups that were the most likely starting points, and many musicians who studied their instru­ment legitimately have stated that they learned most of what they now know at gigs and in nightclubs. It was certainly good enough for Miles Davis, who eschewed the Juilliard College Of Music for the jazz clubs of Harlem and 42nd Street, New York City.

Sessions were well paid, and in the golden years there were plenty of them, mostly taking place in studios all over central London. The trade-off was that the session musician was expected to play anything that was required of him. This meant that he had to have a good working knowledge of almost every musical style of the previous 30 years or more, he had to be a fluent sight-reader and had to be able to improvise a part from a chord chart while instantly and consistently sounding great.

These are of course massive demands, and some guys couldn’t handle it at all. They suffered from acute ‘red light disease’ - they fell to pieces as soon as the tape was rolling. Others couldn’t stand the music itself, and got out as soon as they could to avoid offend­ing their ears any further. Those who stayed the course were rewarded, not just financially but also with the joy of playing with a huge variety of great players. As a bass player playing three or even four separate sessions in one day, during that day it was sometimes possible to play with three or four different drum­mers. It was exciting, challenging, and always a wonderful source of new jokes.

One extra facet of playing with a four- or five-piece rhythm section together in the studio was that, between takes, impromptu jamming would sometimes occur. Like a private jazz gig, it was a time for risk-taking and experimentation, and this informal play­ing became a useful safety valve if the main music wasn’t particularly demanding. In time, many of the same faces would be present on every session, giving rise to the spontaneous evolution of small ‘teams’ of players. Jimmy Page and John Paul Jones met in this way, and went on to form Led Zeppelin; Alan Parker, Herbie Flowers and Barry Morgan coalesced into Blue Mink; Tristan Fry, Steve Gray, Herbie Flowers and Kevin Peake conceived Sky; and as a result of playing together on countless sessions, Ray Russell, Simon Phillips and I formed RMS, starting work on our album at Trident Studios in Soho in the downtime of another project on which we had all been working.

On some sessions, during the first two or three takes of a piece of music, the various players would experiment with the part. Different tempi would be tried and riffs added, and these embell­ishments would invariably improve upon the original arrangement.

One of the responsibilities of a producer is to know when a take is the definitive take. For example, take four might be great but have a terrible mistake in it, while take six might be technically perfect but have begun to lose its freshness. A good pro­ducer would probably choose take five, or patch up take four. A duff producer would be on take ten and still not be happy. Here the conspiracy would begin with looks and glances. The musi­cians would assemble as usual in the control room to listen to the playback of the last recording. Some would be slumped in chairs, some leaning on the mixing desk, while others stared through the window at the empty studio. As the music filled the room one by one we would start tapping our feet, swaying to the rhythm and enthusiastically murmuring “that's the one,” until eventually - and incredibly - the producer would believe us. We would have known it was on tape half an hour ago, while he would never know.

Conversely, a creative and articulate producer, a talented artist and beautiful music would inspire the musicians to gel and to play the written line with feeling, and generate novel riffs and ideas from a chord chart. If the sound in the room was just right, the engineer had taken the trouble to put inspirational reverb in the cans and the musicians were the best, then a ‘take in one’ was possible.

Everyone would be reading, but also listening with great intensity to everyone else; the track would ‘breathe’ and have a vibrant quality. Many famous records sound as good as they do precisely because the musicians playing together on that day generated something quite special between them. In later years, these ses­sion players began quite rightly to be credited on album sleeves - a recognition that had been long overdue. As engineer and studio industry legend Adrian Kerridge recalls: “They were perfectionists at their craft and played their hearts out.”

how to buy this book